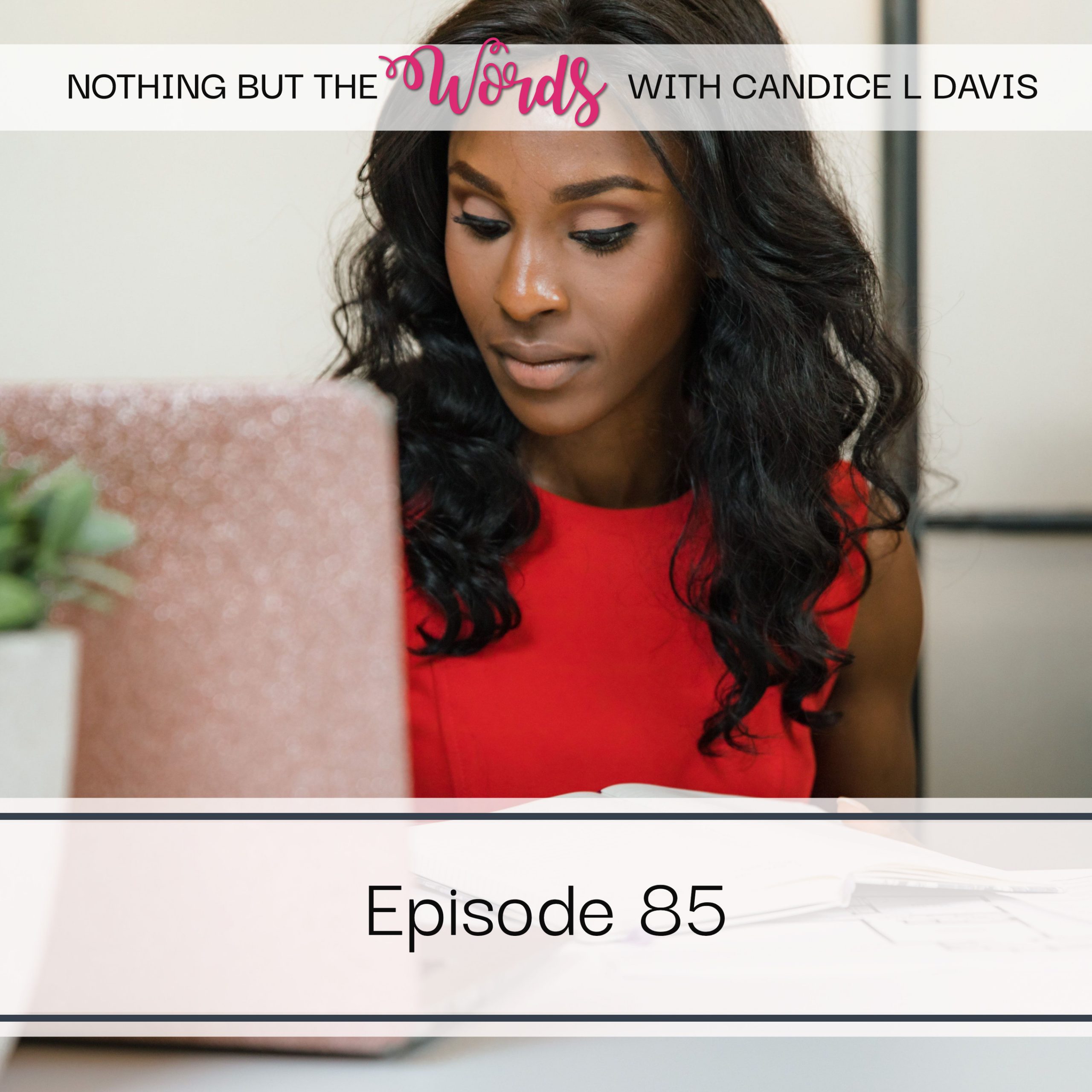 10 Jan 85. The Big Lie about Creativity and Writing

Posted at 03:46h in how to write a book, self-publishing, storytelling, writing tips by Candice L Davis

Do you ever wonder whether or not you have the creative capacity to write an entire book?

Our culture is rife with misconceptions about creativity and who’s lucky enough—or even allowed—to have it.

There seems to be some kind of secret, invitation-only club of people gifted with the creativity to become artists, inventors, and authors but I’m here to tell you that’s not the case-

In this episode, discover the truth about creativity and writing and what it means for you as an aspiring author.

Mentioned in This Episode

Jump-Start: A free guide to help you jump-start your nonfiction book.

Hey there and welcome to Nothing but the Words. I’m your author coach, Candice L Davis.

I hope your week and your writing are both going well.

A while back, one of my coaching clients mentioned me in a Facebook post and thanked me specifically for the work I’d done with the edits for her book.

She and I had a friendly back-and-forth in the comments, and I teased her specifically about being a difficult client because she was so resistant to cutting anything from her book.

Among other things, I’d coached her on cutting several pages from her manuscript.

She was so afraid she would lose some of the meaning or some of her favorite lines.

But once she made the cuts, she was pleased to see how much sharper, clearer, and faster her chapter read.

So we were giving each other a hard time in the comments of her post because we have that kind of relationship.

And then one of her friends chimes in with a comment.

She said something along the lines of, “Well, that’s why we’re the creatives and editors are editors.”

I almost choked on my apple-kale-ginger green juice.

But here’s what I would have told her under different circumstances—and what I want you, as a writer and an author, to know.

First of all, let me just get it out of the way that I’ve been a writer for almost a full decade longer than I’ve been an author coach and book editor.

So authors can’t fool me with the old, “We’re artists, so we just can’t be responsible for the work of making our books great and ready for the world.”

I don’t buy that creativity is an excuse to be temperamental or inconsiderate or lazy about making the work shine.

Second of all, any author who has worked with an experienced and skilled editor should recognize that, especially when we get beyond the mechanics of copy editing, good editing requires just as much creativity as writing a book.

That creativity is applied differently, sure, but a strong editor leans on a creative use of their knowledge to help you with everything from word choice to structure to storytelling to flow.

Don’t underestimate the value of an author coach or editor who’s willing to lend you their whole brain, creativity included, to help make your book the best it can be.

Here’s my third, final, and most important note for that young writer who sought to draw a clear line between the creatives and the non-creatives of this world.

No such line exists.

There’s not some lucky, chosen, secret club of naturally creative people who get to write books and lock everyone else out.

That’s a lie from the pits of hellacious middle school English classes.

As human beings with functioning brains, we are all creative.

And no, it doesn’t matter if your brain functions differently from the typical. You’re still no less creative than the rest of the world.

In fact, your differences probably work in your creative favor.

So often you’ll hear people in this culture talk about how much little boys like to destroy things.

We won’t get into that gender bias right now, but suffice it to say, we focus a lot on how much little kids like to destroy things.

They like to knock down towers built of blocks and kick in sandcastles and smash cakes.

All of that is true for lots of kids.

But we forget that it’s true that all human kids are also driven to create.

They like to build that tower of blocks or that sandcastle or bake that cake.

They like to create a magic wand from a stick or a rocket ship from an empty bottle.

They like to draw or color or paint or sing—all creative acts.

Adult humans are no different.

Traditional schooling does a lot to suppress our creativity, as do many of the jobs where we’re expected to just do what we’re told.

But your creativity never goes away. It cannot be destroyed.

It comes out in your cooking or your knitting or when you embellish the true-life stories you tell your friends to make them more entertaining.

It comes out in woodworking or your social media posts and in playing certain video games or dressing up for DragonCon or for Halloween.

Your creativity imposes itself on your choice of attire, and tattoos, and home décor.

Your creativity cannot be denied.

Let me leave you with this.

If you believe in a Creator of any kind, and you believe you were created in that Creator’s image, then I defy you to choose to believe you are anything less than a creator, small c, yourself.

Whatever your belief system, evidence of your creativity—your ability to create—is all around you.

Look for that evidence and pay attention to it.

You don’t have to be anointed as a creative being, a creative writer.

You can simply choose to channel your innate creativity into writing your book.

Create a sacred space of quiet and contemplation to allow room for your creativity to express itself.

Read well-written books outside of the genres you normally read.

Challenge yourself to keep writing, recognizing that even your first draft is evidence of your creativity.

Those are just lies.

Your creativity is a part of you.

You can choose how and when you want to use it.

Embrace your creativity and own your identity as a creative writer.

It’s yours if you want it.

That’s all for this week’s episode, my friend.

If you need some guidance to get started writing your book, I invite you to download my free Jump-Start Your Book guide at CandiceLDavis.com/jumpstart.

The free guide will help you get clarity and get started writing.

Thanks for listening to Nothing but the Words, I’m your author coach Candice L Davis, and I’ll see you next time.

Learn everything you need to know to write a phenomenal book. Subscribe on your favorite podcast player below.